Over the past two decades I’ve been lucky enough to interview hundreds of TV presenters, actors and actresses in for my job as a journalist specialising in TV and film. Many have been down to earth and charming (Martin Clunes, Nathaniel Parker, John Hurt and Ray Winstone instantly spring to mind) many egotistical, aloof or just plain rude or difficult (names to follow… at some point…. maybe…..!) and some, who have or had reputations for being tricky interviews (John Thaw was definitely one of these) unexpectedly easy-going. Some – Tom Baker is a prime example – have just been wonderfully eccentric and entertaining.

I’ve never been particularly nervous about doing interviews or meeting these people – but there have certainly been occasions when I worried that I might be disappointed. The idea that someone you’ve grown up watching on screen might be, well bolshy or just rather dull, was always a bit of a concern. I think possibly the two people I most felt that most about were Richard Briers and Terry Wogan. Richard because I grew up watching The Good Life (even it’s theme music is a TV equivalent of comfort food) and Terry because my Dad always had his Radio 2 breakfast show on the radio.

So it was with some trepidation that I once had to ring Richard to do an interview on the phone. I was writing the first edition of my book The British Television Location Guide and wanted to talk to him about filming The Good Life. But what if this man who I’d grown up adoring on screen was grumpy or rude…..?  I needn’t have worried. He was patient, charming and generous with his time. And when it came to using a photograph from the series in the book, the BBC Photo Library insisted we got clearance from the actors in the picture before use. So another call to Richard. I can remember his response very clearly: “I’d be delighted old boy”. So a result all round. Interview. Photo use permission granted. Childhood memories of watching The Good Life intact… A lovely man – and a great loss.

(And if you’re wondering, Terry Wogan was also utterly delightful…. but more of that another day….) 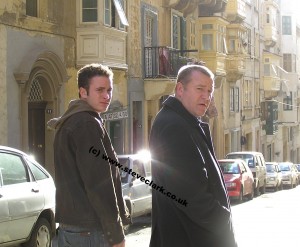 I’ve spent the past 20 years interviewing actors, actresses and television presenters. You might get the impression from films like Notting Hill that these kind of celebrity interviews take place in posh hotel suites and that journalists are wined and dined by public relations flunkies….

Well that hasn’t been my experience very often (and the wining and dining even less so…) – and the most common places I’ve done interviews is in the star’s trailer on the set of whatever they were filming. And location bases are usually car parks on industrial estates. Not really very glam.

That said, there have been plenty of other odd places – and here’s a short list of some of the more unusual ones….

4) Richard Wilson (aka Victor Meldrew) – at a beach bar in Portugal.

5) Harry Enfield – in a church hall

6) Nicolas Cage – in an Olive grove on Cephalonia

7) Noel Edmonds – on a plane back from Russia

8) Alan Davies – in his kitchen

10) Martin Clunes – in a koala park in Sydney

I’m sure there are plenty more….

Ever met a celeb in a strange place? Tweet me @steveclarkuk and let me know…