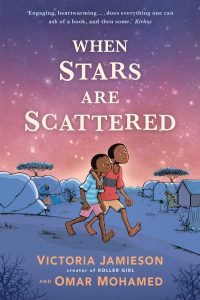 When The Stars Are Scattered by Victoria Jamieson, Omar Mohamed and Iman Geddy

When the Stars are Scattered’ is a wonderful graphic novel of pain, love and tenacity. It is one of the best books I have read recently.

It really captures the life of a refugee called Omar. Omar is not just an ordinary refugee, he is in an unusual situation that he has no parents but has a brother with a disability. Against all the odds, they both make it into the USA after several failed attempts.

Omar helped create this book and it really helps to get inside the characters shoes and understand the difficulty of being a refugee. He and Hassan his disabled brother have a hard time with no parents and running from war but they pull through, and now Omar is a social worker pursuing his dream trying to help refugees who weren’t as fortunate as him.

By reading this it makes me want to do something and help the people who are struggling through who we rarely think of going about our daily lives, not imagining what it would be like to be one of them.

The illustrations are amazing and capture the detail without overflowing with too much which I find with many graphic novels. The text and story are fantastic too and altogether creates a book that is worth treasuring. I would recommend it from eight-year-olds the fifteen-year-olds. A world-class book.

Malamander gripped me from the start and I was so enthralled I read the whole book in one night. From the beginning – I was hooked! The story follows the adventure of Herbert Lemon the lost – and – founder of the Grand Nautilus Hotel in Eerie – on – Sea. The Book follows Herbie as he finds a new friend (and enemy) solves riddles about Mermonkeys and finds answers about his parents; but mainly Herbie discovers how the myth of the Malamanders – a race strange fish like humans – are true!

I really loved reading this book because the author (Thomas Taylor) really made me feel like I was there, particularly when Violet and Herbie are being chased by the boathook man – it scared me at several points as well. One part stood out though, in the fight on a ship towards the end, I don’t want to give away any more of this favourable story, so I won’t say any more of the ending.

This amazingly creative idea mixes reality with illusion non-stop the idea of fish like humans is pure genius! The number of secrets, myths and magic is perfect! The Malamander is a marvellous book, a must-have, a very well done to Thomas Taylor for creating such a memorable story that shall live on for generations.

Plot
Alex Rider is sent by MI6 Special Operations to infiltrate a new and sinister organisation known only as Nightshade. Alex Rider sets off to Gibraltar after the death of Scorpia. When Alex discovers they’ve planned a mysterious attack on London, he will stop at nothing to take them down. But protecting his home city means facing off a ruthless new enemy and putting his life at stake, again. And this time, there’s no one to save him if he makes a mistake. Alex is on his own, with the fate of thousands of people resting in his hands.

Characters
There is Alex Rider, the hero. Mrs Jones, head of MI6 Special Operations, who sort of tricks Alex into going to a high-security prison disguised as Julius Grief who used to be at the prison. There is a 15-year-old assassin called number 9 or Freddy. He was tricked into a fake religion by the 4 ‘teachers’ as well as 25 other 12 to 17-year-olds that make up a deadly organisation called Nightshade.

Opinion
I really like the story it is very clever how Anthony Horowitz links the Mrs Jones’s children being taken to a criminal organisation called Nightshade. Also I really like the way at the end Dominic Royce (Permanent Under-Secretary of Foreign Affairs) is discovered to be the person that pays Nightshade to drop a deadly nerve agent on London.