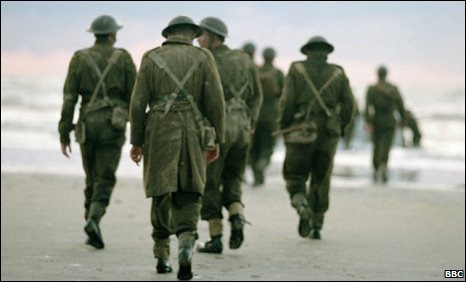 Churchill called it a miracle – and it was certainly that. Over nine days in May and June 1940, 240,000 British and 95,000 French soldiers were rescued from the beaches of Dunkirk in France.

The allies had been unable to hold up against the sheer might and ferocity of the German blitzkrieg attack and had been pushed back to the sea with just a tiny defensive pocket delaying the final Nazi advance.

Prime Minister Winston Churchill ordered the start of Operation Dynamo, an audacious bid to evacuate as many weary remnants of the British Expeditionary Force as possible.

From May 26th, under contrast and shellfire and air attack the boats and their crews returned again and again to rescue the British and French forces and take them back to England.

The operation ended on June 4th. 40,000 troops were left behind, many spending the rest of the war in prison but the rescue of a third of a million men was an amazing achievement – but no victory. As Churchill said: “Wars are not won by evacuations”

Back in 2004 the BBC made a three-part drama documentary about Dunkirk, with a superb cast including Benedict Cumberbatch, and I wrote a piece about the production for TV Times. I was privileged to interview two veterans from the evacuation, one Clive Tonry, a soldier, and Albert Barnes, a sailor, who went over to Dunkirk to help rescue members of the British Expeditionary Force…

Here are the interviews:

Clive Tonry Albert Barnes was just 17 years old when he joined the 48th Division Signal Regiment as a signalman in September 1938 after Germany invaded Czechoslovakia.

In January 1940 he and his comrades were dispatched to France as part of the British Expeditionary Force. “We then spent the next few months on exercise,” says Clive, now 83. “It was what they called the phoney war.”

In May 1940 Hitler’s armies attacked Holland and Belgium then France. Clive and his unit were sent to the infantry brigade headquarters of 48th Division in Belgium where their job was to relay message to troops on the front.

As the Germans advanced, the allied line was pushed back rapidly. At Burghout he and his colleagues found themselves on the frontline. “Then the order came to destroy all our equipment and march to Dunkirk,” he
says.

“It was 25 miles away and we could already black clouds of smoke,” he recalls “But nothing could prepare us for the scene when we got there – it was absolute chaos.

“There thousands of British and French troops milling around all over the place. Stukas were bombing and the Germans were shelling the beaches – it was very unpleasant.”

Clive was in Dunkirk for 36 hour before he managed to get away. “We formed up in orderly queues down to the waters edge and we were detailed off to go into the sea and get small boats,” he recalls.

“I went in with a couple of other chaps and we got a rowing boat which we brought back to the end of the queue. There we filled it up with twelve soldiers and then rowed it out to the minesweeper Leader.

“The Royal Navy wouldn’t let them stop completely as they’d be sitting targets so we had to jump onto scramble nets. You had to jump and hang on for grim death – I managed to do it but quite a few fell into the sea and were lost.

“Thank God those little boats did come for us – because there was no other way of us getting off the beach because the bigger ships couldn’t come in close.” The minesweeper took Clive and the other survivors back to
Margate.

Two years later Clive was promoted to corporal and was later sent to train as an officer. He became an officer and went to Normandy with the 11th Armoured Division as part of the D-Day landings.

“Nobody had any thoughts of heroism,” he says. “They just thought they had a job to do.” He retired in 1972 – after 34 years’ services with the rank of Brigadier. He became a teacher and lived in Dorset. 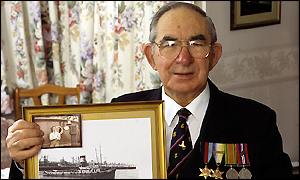 When 14-year-old Albert Barnes went to work on the morning of 31st May 1940 he thought it would just be another normal day. He was a galley boy on the London docks tugboat Sun XII.

Little did he know he was about to become part of one of the Second World War’s most famous episodes – and is thought to have been the youngest rescuer. From the Thames, the tug headed to Dover where it picked up barges full of fresh water and ammunition.

It then headed to Dunkirk where the evacuation was underway. “Being a kid of 14 I’d never even heard of the place,” he says. “When we got there it was an absolute nightmare.

“It was very frightening, particularly when the Stukas (dive bombers) came down. The place was a graveyard – there were bodies floating about and it was the first time I’d seen a dead body. It was horrendous.”

“We didn’t bring men back – we couldn’t get close enough because of our deep draft. Our job was towing ships off that had run aground then we towed them back home for repairs.”

Albert’s mother had no idea where he was as the tug’s owner had only told her was on government business. “When I got home nearly a fortnight later, she said: ‘Where the hell have you been?’

“When I told her she said: ‘Oh my God!'” Four years later Albert was back off the coast of France crewing a tug which helped tow one of the huge artificial Mulberry harbours into place on D-Day. My parents, my son and I spent yesterday morning on a guided tour of Fort Blockhouse, formerly HMS Dolphin, home of Britain’s submarine fleet until 1994. Parts of the site, in Gosport, Hampshire, date back to the 15th century and, although you can still see some of the original defences, much of it was updated and altered in the 19th century (to protect Portsmouth Harbour from a French invasion that never came) and then again during the Second World War (this time to protect the harbour from a German invasion that never arrived.)

Much of the sprawling waterfront site is made up of ugly post-war buildings (the MOD (and its predecessors) doesn’t need normal planning permissions…) but it was a fascinating tour and part of the excellent Heritage Open Days scheme which happens at the same time every year and sees hundreds of sites not normally open to the public accessible for a weekend in September.

Highlight of the tour was a guided tour of the base’s Submarine Escape Training Tower which dominates the skyline and can be seen from miles around. Formerly used by the Royal Navy to train submariners in how to escape from the stricken submarine, it is now no longer in use, due to that 21st century hazard – health and safety!

It seems a risk assessment decided that sailors were more likely to be injured or killed training to escape from a submarine than the chances of them being involved in a real incident which leads to fatalities. It seems rather daft, but I suppose there is some logic to it.

Our tour took us below the the 100-foot water tank – which takes 18 hours to fill up (a procedure that results in a drop in water pressure for residents of the town of Gosport) to experience the claustrophobic atmosphere men would have faced in an emergency situation (although there were only 20 of us in a tiny watertight compartment when the reality was likely to be more like 60). 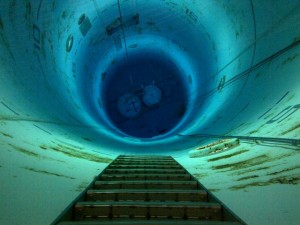 We were told the faster way of submarine escape has a higher risk of sailors getting the bends (through too rapid decompression). But the safer method had drawbacks too – it took four minutes for each person to get out meaning that even with just 60 personnel, the whole procedure would take four hours. As tradition would have it, the captain would be last out (although wounded men would be behind even him if their injuries ran the risk of blocking the escape hatch or killing them try to get out…) 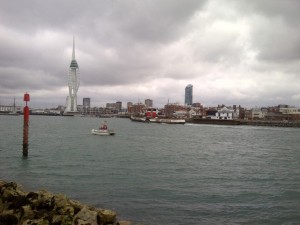 With the advance of technology, these days the policy is to send down another submarine to rescue stricken crew and all sorts of technology (including ‘oxygen’ candles) are used to keep people alive when rescuers plan what to do.

We then took a lift to the top of the tower and peered down to the bottom – where we’d just been stood (below hundreds of tonnes of water, prevented from leaking by a rubber seal!). Our guide then demonstrated the survival suits and individual life-rafts (or rather an old version) which would hopefully save submariners once they’d successfully exited their stricken sub. 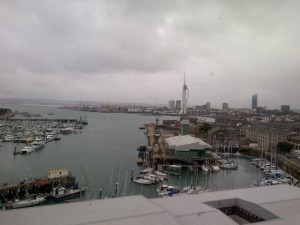 He gave me permission to post the video clip below (you may wish to scroll to about a minute in). In fact, despite having been told not to take pictures of the Fort Blockhouse buildings themselves (a little bizarre in the the age of Google Maps but something I adhered to (the first and third pictures on this blog are sourced from the internet)), we were told we were welcome to take pictures in the tower as none of it was secret. Indeed representatives of both the Russian and Chinese navies have been to the site and had been provided with briefings on its construction. It seems when it comes to accidents involving submarines, rivals – even ‘enemies’ – are prepared to aid and assist each other.