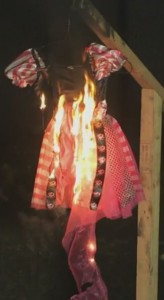 Like most of us, Claudia had assumed that a fancy dress outfit bought from a reputable supermarket would be safe. One could reasonably assume that from a safety point of view such a garment would be treated as children’s’ pyjamas or a nightdress. They are, after all, sold in supermarkets in the same sections: clothing.

But, no, fancy dress costumes are classed as toys and therefore are subject to less stringent regulations when it comes to the risk of them catching fire. This is clearly wrong. As Claudia said on the programme, if a child is holding a toy that catches fire they can drop it. If it’s a costume that they are wearing this obviously isn’t possible.

Very clearly children’s’ fancy dress costumes should be tested to the same levels as nightwear and the regulations about this need to be changed. But we know that our systems for changing things like this often take too long – and action needs to be taken now.

‘Celebrating’ Halloween and trick or treating is a relatively new phenomenon in the UK (and seen by many, including myself, as one of those American imports we could really do without…). It has, of course, become a major money-spinner for supermarkets who have been driving its establishment as a fixture in British life in order to sell more stuff and make bigger profits. (the same could also be said of their new ranges of Thank You presents for teachers and attempts to Christmatise Easter…)

After watching Watchdog last night I tweeted this to the UK’s four major supermarkets:

Dear @tesco, @asda, @Morrisons and @sainsburys, after watching #BBCWatchdog will you be making sure fancy dress costumes you sell are safe?

They have all now responded:

@steveclarkuk We take the safety of our customers extremely seriously and our fancy dress products comply with EU safety rules. Susanna — Sainsbury’s (@sainsburys) May 14, 2015

@steveclarkuk We comply with all current legislation and work with our suppliers to use the most appropriate materials.

@steveclarkuk Hiya Steve, the products we sell are safe and checks are carried out – Charlotte — Morrisons (@Morrisons) May 15, 2015

So there you have it, Britain’s supermarkets have spoken – and despite the knowledge that regulations have failed to put child safety and welfare above profits. I would argue that they have a clear moral responsibility to go further than the clearly inadequate rules on fancy dress costumes are it is they should have pushed the whole Halloween party thing into the mainstream of British life. This “festival” takes place in the autumn and is meant to be about ghosts and ghouls so candles will always be around, when perhaps, in the past, non-Halloween fancy dress costumes and naked flames might have rarely come together.

The supermarkets should not hide behind the excuse of “we comply with current regulations” – that is not good enough. They should go further than this and only sell fancy dress costumes that would pass the same tests as for children’s nightwear. Make no mistake – the law on this will be changed, but supermarkets will already be buying stock for Halloween now so they need to change what they are going to sell now.

The first one that does will receive public acclaim, the thanks of parents and increased sales. So come on supermarkets, do the right thing… and do it now before another little child like Matilda gets hurt.

UPDATE: Since I wrote this piece, all four major supermarkets have confirmed to me, for a piece I was commissioned to write for the Daily Mirror, that they will not be withdrawing these fancy dress costumes from sale or testing them more stringently.