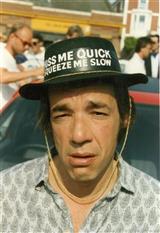 Terribly sad news about the death of Roger Lloyd Pack, a superb actor and a very nice man.

Roger was a versatile character actor and his portrayal of Trigger in Only Fools and Horses demonstrated his great skill as an actor. His performance was subtle, understated and his comic timing was impeccable. Those skills, combined with writer John Sullivan’s brilliant scripts, made for comedy gold.

The beauty of the character of Trigger and his devastatingly funny lines was that Trigger didn’t have a clue that he was saying anything funny. Trigger thought what he said was perfectly logical, he didn’t have an inkling that he was always half a step behind everyone else.

“I played him as if he thinks he’s quite intelligent and he thinks that it’s the rest of the world that’s out of kilter with him,” Roger once told me. “He’s a bit of a dreamer and he’s just in his own world really. A lot of people tell me that they know people like him.”

Roger was cast as Trigger by luck. Original Only Fools and Horses producer Ray Butt went to see a play called Moving which starred Penelope Keith, Billy Murray and Roger. Billy, who went on to star in The Bill as DS Don Beech and in EastEnders as Johnny Allen, was being considered to play Del. Ray didn’t think he was right for the role, but he spotted Roger and thought he would be perfect as Trigger… which, of course, he was.

“Ray called me in to see him and offered me the part of Trigger in this new series but he didn’t know when it was going to start because he hadn’t yet found the right person to play Del at that time,” Roger recalled. “I was pleased because I knew it was good. It was a class above the rest.”

Roger worked extensively, appearing on stage, television and on film. Yet, even years ago, he predicted that it would be Trigger for which he would always be best known. “I think whatever I do, when I die it will be a case of ‘Roger Lloyd Pack, best known for his portrayal of Trigger in Only Fools and Horses…’” he told me – and he was right. A much loved man, who played one of television’s most beloved characters. He’ll be greatly missed.

Posted January 16, 2014 by admin in category Only Fools and Horses