The camera can lie (well sort of…) I saw this photo on Facebook this morning. At first I thought: “That’s a bit daft and insensitive – they can’t preach austerity and then order loads of champagne (probably at taxpayers’ expense)”

Then I thought: “But surely no political party would be so rubbish as to do this, so soon after winning the election.” Whatever you think of the Conservatives, they do understand how badly such a picture would have played on social media.

The revelation that it wasn’t taken this weekend, made me even more suspicious….

The photo was credited to well-respected news agency AP (Associated Press) so I had a look on its website… after a few minutes I found it. 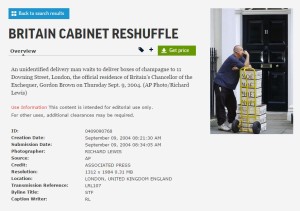 And there is was confirmed: it was an eleven year old picture taken while Gordon Brown was Chancellor of the Exchequer and Tony Blair was Prime Minister.

@steveclarkuk You can tell its old. Look at the Bluetooth earpiece!

So it just goes to show, while cameras can’t exactly lie, the impression an image can, as can the timing of its use.

Posted May 11, 2015 by Steve in category Uncategorized