Revealed: He who wrote, He Who Dares 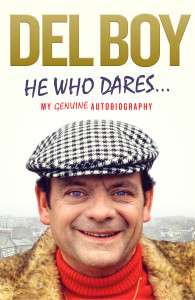 He Who Dares, the much anticipated autobiography of Peckham legend and businessman Del Boy Trotter, has been getting rave reviews and is already a Sunday Times best-seller.

Published by Ebury last month, lots of people have been asking who actually wrote it. Well, I can today reveal that Jim Sullivan, son of Only Fools and Horses creator John Sullivan, penned it.

The 302-page book is based on Jim’s Dad’s Only Fools and Horses scripts but Jim has also added material from John’s notes which means the book is sprinkled with original and authentic material that has never been seen before.

Jim, who has previously written episodes of Only Fools spin-off The Green Green Grass and also last year’s Sport Relief sketch which saw the Trotters rub shoulders with David Beckham, says: “We wanted the book to be as authentic as it could possibly be.

“My main concern was getting the tone of Del right.  Del would write as he speaks, which isn’t always pretty (or coherent), but it has its own rhyme and reason. And, whether it’s achieved or not, I wanted the readers to hear Del as though he’s there in the room chatting to them.

“The trickiest part, besides trying to cover and include such a large amount of material, was filling in the missing decade of the 70’s and getting up to speed on what the Trotters’ have been up to since we last saw them, but it has been a lot of fun and has given me a deeper appreciation of the depth and richness of this world my Dad created.

“I also managed to work in some of my Dad’s notes, a couple of examples being the truth about Triggers’ parentage and ‘Trotter-Trim’.”

You can order the book here: amzn.to/1KSopyy

Posted November 6, 2015 by Steve in category Only Fools and Horses