The funeral took place today of the much-loved actor Roger Lloyd Pack who was famous, of course, as Trigger in Only Fools and Horses, and was an actor of great range and depth.

Roger died of pancreatic cancer, the ninth most common cancer in the UK. More than 8,000 people are diagnosed in the UK every year and although it can affect people of any age, it is most common in those aged between 50 and 80.

Pancreatic cancer is very difficult to detect and treat as it causes few symptoms in its early stages, when the tumour might be more treatable, but is often not diagnosed until it is relatively advanced. Surgery can be used be used to remove the tumour but this treatment is only suitable for around 15-20% of patients.

Research into finding a cure for pancreatic cancer was very important to Only Fools and Horses creator John Sullivan as his great friend, actor Ralph Bates, had died of it in 1991 aged just 50. 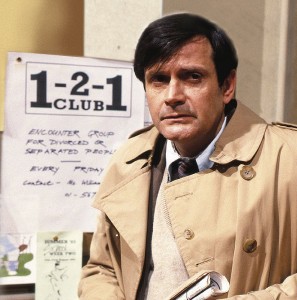 Ralph (right), who starred in John’s BBC comedy series Dear John, died ten weeks and one day following his diagnosis. He left behind a wife, Virginia, a son Will and daughter Daisy.

Following Ralph’s death a charity was set up bearing his name – The Ralph Bates Pancreatic Cancer Research Fund – and John was a Patron of it until his untimely death in April 2011.

The main objective of The Ralph Bates Pancreatic Cancer Research Fund is to provide funds for research into causes and cures for pancreatic cancer and a donation to the charity will help with this. You can make a donation on the charity’s website.

There is also a national charity, Pancreatic Cancer UK, which offers support to people with pancreatic cancer and their families, information about treatment and details of research into the illness. Donations can be made here.

Wouldn’t it be great if everyone who ever laughed at Trigger and enjoyed Roger’s sublime performances in Only Fools and Horses made a small donation to one of these charities to help fund research to combat this awful illness.

Posted February 13, 2014 by admin in category Only Fools and Horses