Missing episode of Only Fools and Horses ‘found?’ It wasn’t actually lost… 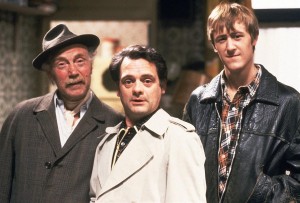 The Sun newspaper today claimed that a missing episode of Only Fools and Horses had been found. Well it actually hadn’t been lost. However The Sun is correct in reporting that a lot of people may not have seen it, although it has been on YouTube and sold illicitly on DVDs. It hasn’t yet been released on an official BBC DVD because, as I understand it, the copyright and rights situation is complicated.

Here’s an extract from my book Only Fools and Horses: The Official Inside Story: During 1984 a special episode of Only Fools and Horses called Licensed To Drill was filmed as a schools programme. In the episode Del has big plans to become an oil baron with his own company called Trotter Oil.

John Sullivan recalled: “We were approached by an American company called Phillips Petroleum in 1984 because the head of their European Division Philip Caudill was a big fan of Only Fools and Horses. He wanted to make an episode featuring Del trying to get involved in the oil business, which would be screened as an educational programme. I wrote the script and it was filmed at a studio in south west London by an independent company called Topaz because the BBC didn’t want to make it. It was great fun to do but we had to be a little bit more careful with the script than usual as it was being aimed at children.”

The nineteen-minute episode, which had a different theme tune, written and sung by John Sullivan and arranged by Ronnie Hazlehurst, featured Lennard Pearce’s final appearance as Grandad.

Main picture: Gold, which screens episodes of Only Fools and Horses most days

Posted November 5, 2013 by admin in category Only Fools and Horses