Costume designer Phoebe De Gaye, the woman responsible for giving Del and Rodney their Peckham chic looks in Only Fools and Horses, won a BAFTA last night for her work on the BBC drama The Musketeers.

Back in 1981, Phoebe was a young costume designer working at BBC Television Centre when she was allocated to work on a new situation comedy called Only Fools and Horses. “I went off to meet [producer] Ray Butt and then I met the actors,” she recalls. 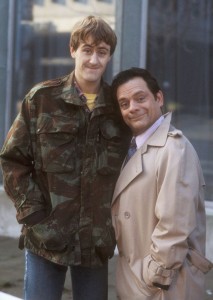 Phoebe got her inspiration for Del’s gear by going to car boot sales and looking at people not unlike Del Boy. “I remember one guy struck me,” she recalled. “He was a real jack-the-lad type with a paunch and white shoes and pushed up hair. I thought Del ought to have had permed hair like footballer Charlie George but I couldn’t persuade David to go for that!”

Once she had some ideas Phoebe made some rough sketches that she then presented to the production team. They approved them and with just a very small budget to spend she then set about gathering what she needed. Del’s costumes needed a little more variety so she took David Jason shopping in London’s Oxford Street to find the stuff for Del Boy to wear.

“We went to lots of different shops and I got David to try on all these horrible suits after looking around for a while and finally bought the suit in a really cheap and cheerful shop,” said Phoebe, pictured below on the set of The Musketeeers in the Czech Republic.

“Things would be bought at the sort of places that the Trotters themselves would have shopped at,” added Phoebe, Lark Rise To Candleford and Agatha Christie’s Marple. 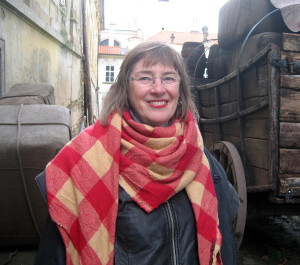 In the early days Rodney was rarely seen without his green camouflage combat jacket which came from BBC costume department stock and Phoebe added a Yasser Arafat-type headscarf which she bought at Shepherd’s Bush market. “Rodney always had a grungy look well before grunge became fashionable!” she said.

There’s more on dressing the Trotters – and masses of other behind-the-scenes details plus interviews with the stars – in my book Only Fools and Horses: The Official Inside Story 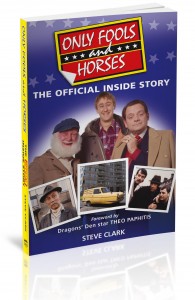 Posted April 27, 2015 by Steve in category Only Fools and Horses