Happy days hunting for dinosaurs (well, their fossils) on the Isle of Wight… 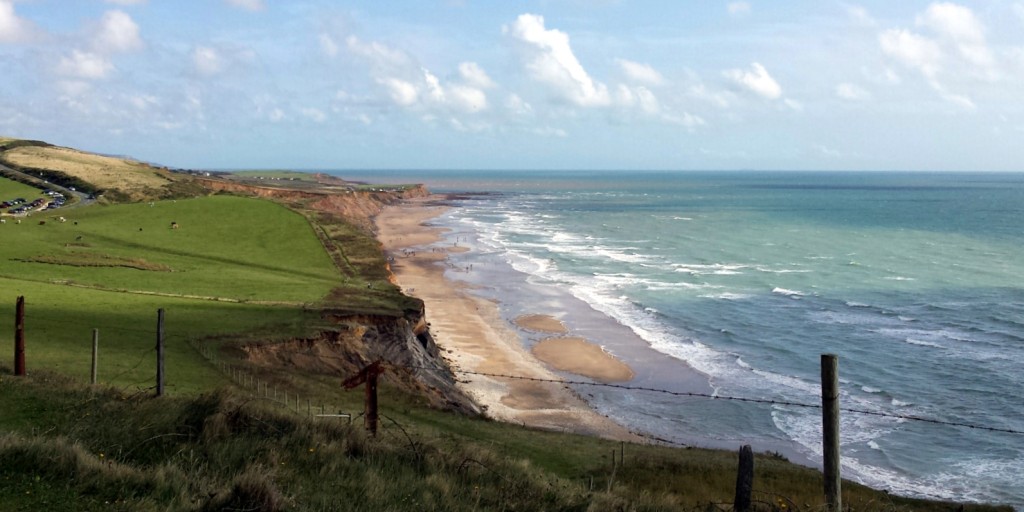 We recently spent a very enjoyable week on the beautiful Isle of Wight. Living in Hampshire, the Isle of Wight isn’t far away as the crow flies, but as you need to take a trip across the water to get there, going there always feels a bit special. 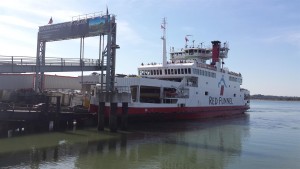 We took the car (very laden, as holidaying with two young children means you can never travel light!) and travelled from Southampton to West Cowes with Red Funnel Ferries – and it all went very smoothly.

It was remarkably stress-free. The ferry was bang on time and boarding was efficient. We were soon aboard and greeted by a cheery and helpful member of the Red Funnel team. Within a couple of minutes we were sitting enjoying the view with a decent cup of coffee. 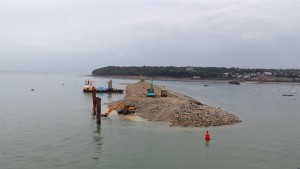 The trip across the Solent takes under an hour, so there’s not exactly a lot of time for children to get bored, but even so, I was jolly impressed to hear over the tannoy that there was a magician to keep children entertained.

But this wasn’t to be just any old magician – this one would actually be teaching a few magic tricks. So Small Son and I moved up a deck and found a crowd of other parents and children about to literally learn some of a magician’s tricks of the trade. 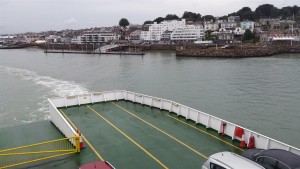 The three tricks demonstrated – a card one, a rope one and a dotty one – were well selected too… tricky (sorry!) enough to baffle most of an audience but straightforward enough for children to master, with a bit of practice.

At the end of the demonstration tricks could be bought and more tuition given to make sure every child could do the trick. But this was certainly no hard sell operation, and at just £2 a trick (I’d expected more than double this price) they were a bargain.

And with that, laden with all three tricks to show the rest of the family, my wannabe Paul Daniels and I returned to our seats – with me a bit relieved that Small Son had not asked if the magician could saw me in half…

(On the return journey Red Funnel, which has just invested over £2.2 million in the refurbishment of the Red Osprey passenger and vehicle ferry to the Island, with two new lounges and a sun deck, had laid on face painting for the children, which again proved to be very popular!) 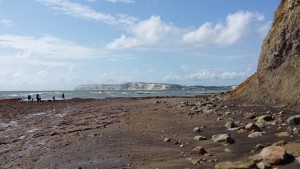 We’d rented a house in Freshwater Bay but had a few hours to kill before we could get the keys so as the sun was shining we headed to Compton Beach and within an hour or so of arriving on the island, Small son and I were in the sea and making the most of the good weather. 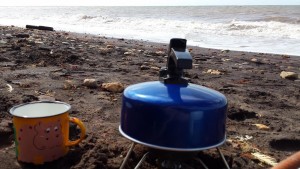 I can’t remember the last time I swam in the sea in the UK, but it was surprisingly warm and it was just as well that we enjoyed that sunny weather that day as it poured down for the next three days…

Now all parents with small children know what a nightmare constant rain (in this case, torrential) can be as little people need to have a run around and aren’t as content to sit in a pub all afternoon with a drink and a good book as we grown-ups might be…

Our problem was solved by the discovery and a fantastic new soft-ish play barn at Tapnell about 10 minutes from where we were staying.

Located on a farm, it was a fabulous find: a great indoor play area for children with a zip wire, bales of straw to climb on, massive tractor inner tubes, little tractors, massive building blocks, a huge chalk wall and a climbing wall. 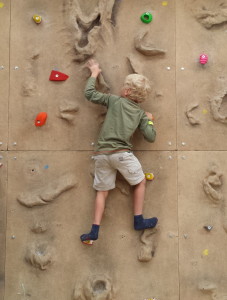 There was something for all ages (and adults were allowed on the zip wire when it was quiet!) and more than enough to occupy a few hours on a rainy day – and we made two return visits during our holiday.

Fifty yards away was a restaurant which did everything from tasty breakfast to proper lunches. The food was great, the staff were very friendly and helpful and the cow-themed décor cool, without being too OTT. All in all, a very well thought-out venue. 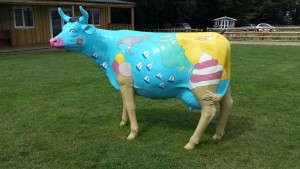 With considerable justification given the number of dinosaur bones which have been discovered in what is only actually a 147 square-mile island, the Isle of Wight promotes its dinosaur heritage heavily.

We spent a very enjoyable afternoon at Dinosaur Isle, a recently build centre for the island’s dinosaur and geological heritage. Although the rather poorly laid out building isn’t a patch on London’s spectacular Natural History Museum, it was busy and there was plenty to occupy dinosaur-mad children.

But hunting for dinosaurs (or at least their remains!) is even more fun so we booked places on a fossil hunt with dinosaurexpeditions.co.uk. We met expert  Agnes on the beach at Brook Chine and then spent a very enjoyable few hours finding fossils and fossilised wood which had been washed in on the tide. 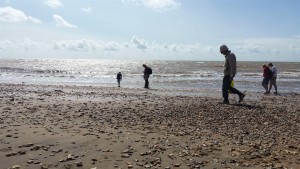 Agnes was endlessly patient with all the young (and some not so young!) fossil hunters identifying and classifying every stone or fossil they brought to her. It was hard not to be enthused when easily picking up bits of rock that were 120 million years old! 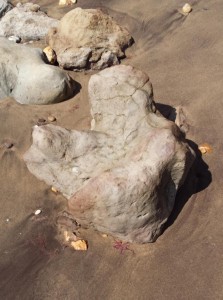 The fossil hunt was very enjoyable and my Son ended up with around three dozen bits of fossils of one type of another. The highlight for me was seeing huge fossilised iguanodon footprints at Compton Bay. Hundreds of millions of years ago this part of the island was a muddy lagoon and the footprints the dinosaurs made in the mud became fossilised. As the cliffs have eroded they’d been uncovered, although they are frequently re-covered by the tides so they might only be visible for a while. Each day can bring something new… 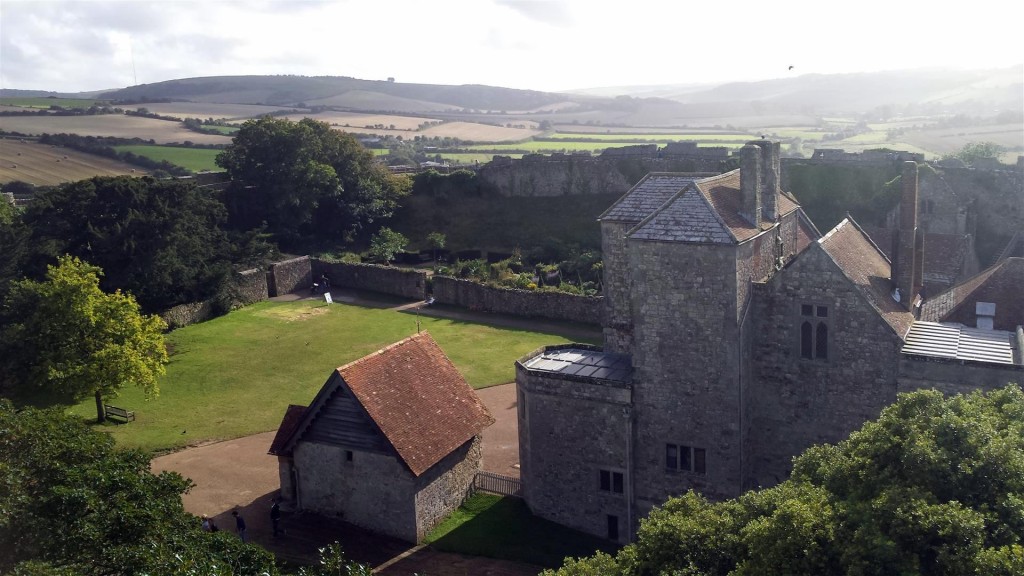 Another must as far as I’m concerned if you visit the Isle of Wight is a trip to Carisbrooke Castle. It ticks all the boxes for a great castle as far as I’m concerned: it’s perched on the top of a hill; has stunning views; lots of space for children to run around and a proper place in history (Charles I was held prisoner there during the English Civil War, shortly before he was executed). 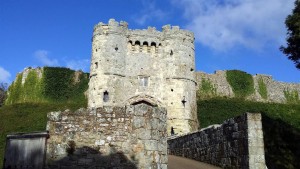 On the day we visited there were lots of extra activities to see and do such as short plays, a very funny jester and, instead of the scheduled jousting (due to several days of torrential rain, the ground was understandably too wet and dangerous for knights on horses) the knight gave us a superb demonstration of just how tricky wearing, not to mention fighting in, a suit of armour would have been. Brilliant managed by English Heritage, it’s a fabulous place for a day out… (Weather tip: better for dry weather, but has some weather cover if wet) 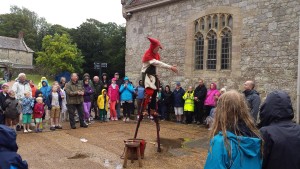 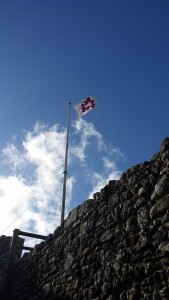 The following day we headed to Robin Hill Country Park, which I hadn’t visited since I went to it on a day trip with the cubs many (many!) years ago. It was very different to how I remembered it. It’s one of those attractions that is hard to categorise. Part nature centre, part theme park, there’s plenty to do and see.

We particularly enjoyed the bird of prey display (with some hilariously reluctant feathered performers), the Canopy Skywalk, a 100-metre walk along the tree top canopy and – best of all – the Toboggan Run, an fun and surprisingly fast, run down ¼ mile metal track on a wheeled cart. There is a modest extra charge for this, but arguably one go on it should perhaps be included in the price of the entry ticket. (Weather tip: Less fun in the rain, so try to go on a dry day).
Despite mixed weather, we had a great week on the island. There is plenty to see and do, some great places to visit and the beach is never far away, which, if you have small children as we do, is somewhere they never get tired of… particularly when there’s the chance of uncovering a dinosaur or two… 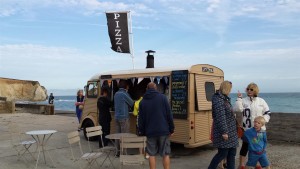 If you happen to see mobile Wightwood Pizzas, who operate from a beautifully restored vintage Citroën van, then make sure you try one of their pizzas. You won’t find a better one!

Getting there:
As you will have already read, we travelled with Red Funnel Isle of Wight Ferries, who kindly provided us with our crossing ticket. Red Funnel offers day return foot passenger crossings from just £9.00, and short break return vehicle crossings from just £57.00, together with ferry inclusive holiday accommodation, attraction tickets, festival and event tickets, and activity packages for visitors to the Isle of Wight. For more information and to book, visit www.redfunnel.co.uk or call 0844 844 2687.