Douglas Hodge to star in Charlie and the Chocolate Factory 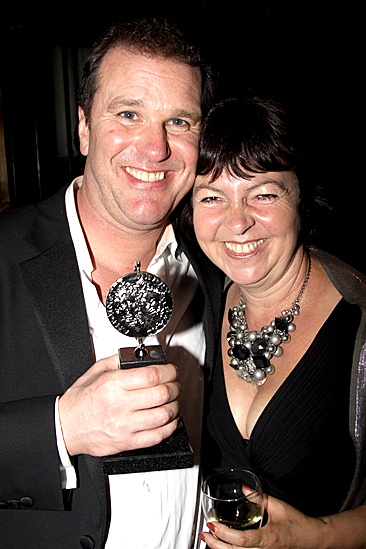 Actor Douglas Hodge – who played adult Damian Trotter in the brilliant flash-forward scene in the classic Only Fools and Horses  episode Heroes and Villains – is to play Willy Wonka in a new stage adaptation of Roald Dahl’s book Charlie and the Chocolate Factory. The show will open in London’s West End next May. For more details click here.

Playing Damian isn’t Douglas’ only connection to Only Fools – he’s also the partner of Tessa Peake-Jones, who played Raquel. They are pictured (left).

Here’s a longer article from the Daily Mail about the show, which will director by Sam Mendes, who directed the new Bond film Skyfall. Just back from The Heritage Foundation’s plaque unveiling and lunch at Teddington Studios  in honour of John Sullivan, a much-missed friend and, of course, the writing genius behind Only Fools and Horses, Just Good Friends, Citizen Smith, Dear John, The Green Green Grass and more.

The plaque was unveiled by Only Fools stars Sir David Jason and Nicholas Lyndhurst in the presence of John’s family and colleagues and friends including John Challis (Boycie), Sue Holderness (Marlene), Roy Heather (Sid), and The Green Green Grass stars Ella Kenion, Jack Doolan and Pete Hepplethwaite and a host of fans. The plaque unveiling was followed by a lunch and John’s long-time producer and friend Gareth Gwenlan paid a moving tribute to John’s remarkable talent.

Sir David Jason also made a speech and pointed out how much joy John had brought to the lives of so many people through his work. He told how he had recently met a former soldier who had told him how he’d been serving in Afghanistan when one of his platoon had been killed and he and his men were at their lowest ebb, he had opened a parcel from his wife, kept for when his morale was low.

It contained 12 pot noodles and a DVD of Only Fools and Horses – The Jolly Boys Outing. The former soldier told Sir David, how even in extremely difficult circumstances, it had helped to lift his men’s morale, remind them of home and of what they were fighting for.

This, Sir David, said was a testament to John’s writing and how it could both move people and make them laugh.

Lunch was followed by an auction, proceeds of which went to the Bomber Command Memorial Fund, something John would have been very pleased about – and indeed the event was attended by a number of former members of Bomber Command.

For me, it’s been a day of mixed feelings really. It is lovely that John has been honoured in this way, but his untimely death last year at the age of just 64 is still so sad.

Revealed: Behind the scenes on a Boycie and Marlene photoshoot Back in 1997 I arranged for John Challis (aka Boycie) and Sue Holderness, who plays Marlene, to a do TV Quick magazine’s Christmas Film Guide.  John and Sue did a photoshoot with leading photographer David Boughton and then talked about that Christmas’ films on television. I recently found some behind-the-scenes pictures and a very funny video clip (you’ll see why!) from the shoot. David Boughton has also very kindly allowed me to use some of his photos here.

Here’s the video clip (You’ve Been Framed, eat your heart out!): As you might imagine the shoot was a lot of fun – and the feature helped to promote the Christmas special of The Green Green Grass.