Of course the scene everyone still talks about from Heroes and Villains is the moment where we first see Del and Rodney dressed as Batman and Robin. Here, in a short extract from my book Only Fools and Horses – The Official Inside Story, David Jason and director Tony Dow reveal how it was done…

Filming the memorable Batman and Robin scene in Heroes and Villains required David Jason and Nicholas Lyndhurst to make complete fools of themselves. “You have to have a tremendous sense of fun and self-deprecation and you can’t take yourself too seriously and do things like that,” said David. “You’ve got to be a bit daft in the head to do it. When I got the script I read it for a while, then I had to stop. I closed the page and laughed out loud. I had to put it down. I could see in my mind what John [Sullivan] had written and it was priceless.”

Filming it, in the early hours of a cold November morning, was another matter. David recalled: “Nick and I had to film it about six times because we couldn’t do it for laughing. I’d be looking at him in all his gear and he’d be trying to say serious lines and I just found it very funny. He’d say: ‘What are you laughing at?’ and I’d say: ‘Well you’ve got to see you from where I see you.’”

The production team went to great lengths to make sure the press didn’t get pictures of David and Nicholas as Batman and Robin and spoil the surprise. They kept their costumes covered up until the last minute and when a camera lens was spotted the unit electricians dazzled it with powerful film lights. Finally one persistent photographer was encouraged to leave the area by a security guard with an impeccably trained Rottweiler.

“I kept David and Nick dressed as Batman and Robin in their caravan until the very last minute,” recalled Tony Dow. “We used two stand-ins for focusing and setting up and then got them to run to the actual spot where we were filming, shoot it and then immediately got them back out of sight. We were desperate that no one should get pictures of them as Batman and Robin because we didn’t want to spoil the surprise for people watching on Christmas Day – and we managed it. We were there all night but the actual filming of David and Nick only took about two minutes.”

It goes without saying that there’s loads more in my book about how Only Fools and Horses was made. It can be ordered by clicking here or here

My day in a BBC broom cupboard… 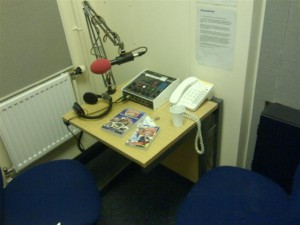 When I say broom cupboard I am, of course, joking: it was actually a little studio (pictured) where you could in theory talk to any other radio station in the world with the sort of sound quality which means you could be in the same room as the broadcaster you’re being interviewed by. My interviews today weren’t so far away – I spoke to BBC local radio stations in Hereford & Worcester, Derby, Humberside & Lincolnshire and Jersey. However, as you can see in the picture the studio wasn’t very big. I didn’t have a cat with me to swing, but the studio wouldn’t have been big enough to swing one in anyway (not to mention, swinging a cat around must be illegal…)

I’ve always loved radio. I’m an avid radio listener and a long time ago, when I was at college, part of my course involved making our own radio shows which was great fun. So it’s medium I’m very comfortable with and doing interviews about Only Fools and Horses is always fun. It’s one of those shows that everyone – young or old – loves and recounting stories about how it came about or how John Sullivan came up with some of the best moments is always a pleasure.

Over the years I’ve done quite a lot of down-the-line interviews (mostly about Only Fools but also about where TV shows are filmed – as I’m also co-author of The British Television Location Guide). I once even did an interview on the phone from Ayres Rock in Australia while on holiday at gawd-know’s-o’clock, upside-down time!) You basically sit in a little room in front of a microphone and every so often you hear a phone dialing and lights flash on a little control panel. You then put some headphones on and someone comes on the line, says hello and tells you that the presenter will talk to you shortly. You then hear what’s being broadcast – usually the weather, traffic, news or sometimes the end of a record – and you’re off.

They are usually live, but are sometimes pre-recorded and broadcast later that week. The presenter will (hopefully) know about the book or whatever you’re there to plug and you just chat away until time’s up (usually after about 15 minutes). It’s really just like being on the phone to someone – but with loads of other people listening in! It can be nerve-wracking at times – I invented a new word today during one interview and never did think of the right one and sometimes you’ll be asked a question you either don’t know or have forgotten the answer to – but on the whole everyone is very nice. It’s probably very different if you’re a politician….!

In addition to the down-the-lines chats today, I also did nearly a full hour at lunchtime today in the main BBC Radio Solent studio with presenter Alex Dyke. That was a much more in-depth chat and Alex had some pretty forthright views about a number of things including the near constant repeats of Only Fools and Horses, but again – all good fun. You can listen here if you want to… (from about 120 minutes in.)

All in all, a pretty usual way to spend a day… Very sad to hear of the death of Clive Dunn. I grew up watching Dad’s Army and Grandad and seeing his face and hearing him say one of Corporal Jones’ catchphrases like ‘Don’t Panic’, ‘They don’t like it up ’em’ and ‘Give ’em the old cold steel’ never fails to make me smile.

“Back in the autumn of 1967 television producer David Croft and his writing partner Jimmy Perry were looking for cast for a new comedy series they were making for the BBC. The show, called Dad’s Army, was all about the exploits of a group of old men who were members of a south coast town’s wartime Home Guard platoon. They had already cast most of the major parts for the show but there was one more part that needed filling – that of bumbling, elderly butcher Lance Corporal Jack Jones – and it was offered to character actor Clive Dunn. But he was busy at the time in The Spike Milligan Show and had to turn it down. Croft thought of David Jason, a young character actor who, although only still in his late twenties was well skilled at playing old men. Croft thought highly of Jason and had used him a couple of times before in a BBC sitcom he produced called Hugh and I, which starred Hugh Lloyd and Terry Scott as two friends who lived together in south London.

David Jason was called in to read for the part and two hours later his agent rang to tell him that he’d got the job. Three hours after that she rang back to say she had very bad news and that he hadn’t got it at all. In the meantime Clive Dunn had discovered that no more Spike Milligan shows were being made at that time and he decided to accept the part in Dad’s Army after all. Understandably David was hugely disappointed to lose a part that would have brought him his first big break into mainstream television and Dad’s Army became a major success and ran for nine years. These days he’s rather glad that it happened that way.

For life would have been very different for him if he had starred in Dad’s Army. He would have been busy filming that series when the part of dopey corner-shop assistant Granville in Roy Clarke’s Open All Hours came up. That would have meant that he would have never worked with Ray Butt on that show – or been cast in It’s Only Me – Whoever I Am where he showed off his ability with accents by mimicking Ray’s strong London accent.

Then he would have never even been considered for the part of Del Trotter – the role that has made him famous and let him demonstrate the brilliant acting skills that have since led to countless straight roles. “After I lost the part in Dad’s Army and it started to become really successful there were times when I’d watch it and see Corporal Jones and I’d say: ‘I was offered that bloody part!’” he recalled.”

David first told me about missing out on the Corporal Jones part during an interview in the bar of Bristol hotel in 1990 – and he reflected on how Clive’s decision – and fate – had had a enormous impact on his future… even though obviously he didn’t know it at the time….