A tribute to Ray Butt, the legendary Only Fools and Horses producer and director 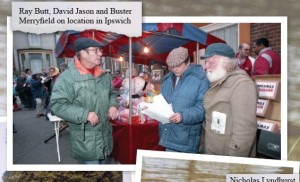 I was very sad to learn today of the death of television director and producer Ray Butt. He died on Friday, aged 78.

John Sullivan and Ray Butt met in the late 1970s when Ray directed episodes of John’s first BBC comedy Citizen Smith. They immediately got on well – their similar working class backgrounds gave them a natural rapport and they shared a mutual passion for the business they worked in. They became friends and began a fruitful working partnership that would last for many years.

“The first good thing was that we had similar accents,” Ray, who joined the BBC in 1955 after National Service in the RAF when a lot of vacancies were created at the corporation following an exodus of employees to the newly formed ITV, once told me. “John is a south London boy and I’m an east London boy so we seemed to talk the same language.”

When John’s next series Over the Moon was cancelled and with a young family to support, he was completely flattened. He arranged to meet Ray for a drink the following week at Ray’s local, The Three Kings in North End Road.

Over several pints the two friends talked of their disappointment and John looked for inspiration. Their conversation covered a plethora of subjects including talk of their childhoods and their families and now and again John would bounce ideas off Ray and make suggestions about new characters.

John had one hazy idea at the back of this mind that wouldn’t go away about a wheeler-dealer street market trader who dealt only in cash and would sell anything to anyone. But he knew the BBC didn’t like it because he’d already talked to BBC’s Head of Light Entertainment, Jimmy Gilbert a few years before and it had been given it a very firm thumbs down.

Ray Butt, though, thought it was a great idea. He told me: “At the time the papers were full of all this stuff about the black economy and this fella John talked about was that sort of bloke. He’d only deal in cash. He was a guy who would do anything for readies and he didn’t pay any tax. He didn’t take anything from the state but wouldn’t give anything to the state either. He was a readies man, simple as that.”

A few weeks after John’s initial conversation with Ray in the pub, he arrived at Ray’s office at BBC Television Centre with a draft script for Readies, as he called the show at that time. Butt was impressed. “I read it, liked it and sent it to Head of Comedy, John Howard Davis,” he recalled.

Despite some reluctance over the first episode, Howard Davis did see the potential in the series and with pressure from Ray, commissioned a full series, although there was no guarantee that it would ever actually go into production. However, it did get the green light.

Nicholas Lyndhurst – already a star from his role in the sitcom Butterflies – was immediately in the frame to play Rodney but casting the part of ducking and diving, wheeler-dealer Del was much more problematic.

The part was offered to actor Enn Reitel (who went on to star in the ITV comedy Mog) but he was unavailable. Jim Broadbent (who later played bent copper Roy Slater) was offered the role but he too was already contracted to a appear in play. Robin Nedwell was considered and so was Billy Murray (later to find fame in The Bill as Detective Sergeant Don Beech). Ray went to see Billy in a play and although he concluded that he wasn’t right for the role, he did spot another actor in it, Roger Lloyd Pack, who he thought would be perfect for the role of Trigger.

With just a few weeks before filming Ray was getting increasingly worried about not having a leading man. Then one evening he suddenly had a lightbulb moment: David Jason. Other BBC executives and John Sullivan were unconvinced but Ray was absolutely certain.

He’d recalled his days working as Production Manager on Open All Hours. After filming he, producer Syd Lotterby and David would often play pool at the hotel where they were staying. David – who played wimpy Granville in the comedy, alongside his friend Ronnie Barker – was fascinated by Ray’s east London accent and often mimicked him.

There was considerable resistance to David being cast, for at the stage of his career he was better known for playing old men (such as Blanco in Porridge) or gentle characters like Granville, not a loud, brash Londoner like Del.

Ray stood his ground and eventually David was brought in to read with Nicholas Lyndhurst – and within fifteen minutes anyone who needed to be convinced had been. David was cast as Del Boy – and, of course, television comedy was never the same again.

Of course the filming stories from those days are too numerous to go into here… Nick Lyndhurst tells a great tale of being threatened with the sack by Ray if he laughed during the filming of the famous chandelier scene and how he saw Ray shove an whole handkerchief into his mouth to avoid laughing and spoiling the shot, then there was the big wind-up they played on Ray during filming of To Hull and Back…

Of course, it wasn’t just Only Fools and Horses that Ray worked on with John Sullivan. He also produced and directed John’s hits Just Good Friends and Dear John and he and John remained good friends even after Ray retired.

I first met Ray Butt in 1990 – not long after the transmission of the Jolly Boys’ Outing episode – when I started interviewing the Only Fools production team and cast for a newspaper series about the show. I instantly liked Ray – he was a real character and tremendous company. We had quite a boozy lunch and he told brilliant stories.

We met again a couple of years later when I was writing my first Only Fools book The Only Fools and Horses Story. He was living in France at the time and we met in Normandy and did a very long interview over a meal in a very average restaurant, washed down by lots of coffee – and some wine… In fact I think we carried on until the evening…

I last saw him four years ago at the end of filming wrap party for the last series of The Green Green Grass. The party was held at Teddington Studios and it was a great night. With characteristic generosity John Sullivan had arranged for a car to bring Ray to the party from his home in Suffolk and put him up in a hotel.

It was great to see him. He was older, of course, but he was still the chirpy, funny cockney man I’d met all those years before. I enjoyed his work long before I was lucky enough to meet and get to know him – and he leaves behind a great portfolio of work that will have generations laughing way into the future. I certainly won’t forget him – and I feel very privileged to have known him.

Posted July 16, 2013 by admin in category Only Fools and Horses